The weekend weather has been glorious, with striking sunsets over the sea at Seaford. This time last year the kittiwakes had returned to their clifftop colony round the corner from our house at Splash Point. The frequent storms washed away their precarious nests which cling to the chalk cliff but the colony persisted and by summer the young birds were ready for their six months out at the Atlantic sea. 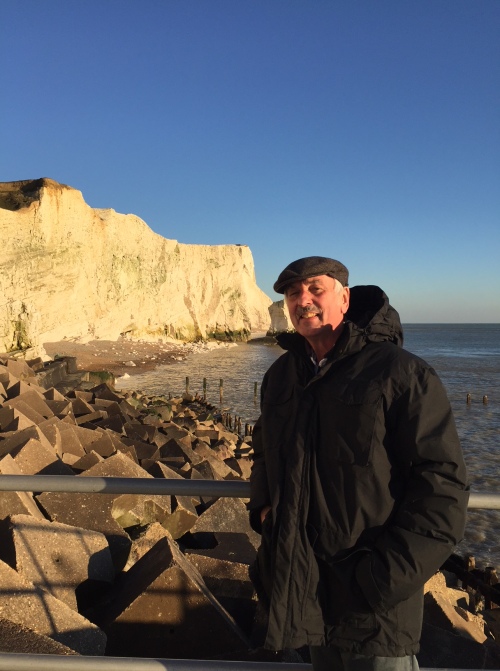 Today we walked down to the groyne and checked if these gentle, delicate birds had returned. They are smaller than seagulls, and don’t screech or fight over the fish and chips that visitors offer on the beach. Instead feeding on the declining stocks of sand eels. But so far they have not returned, probably finding a way to avoid the Siberian winter predicted for the next few weeks.
Mark and I have been thinking how suddenly our lives are changing.

On Monday February 5th we stayed in Wimbledon and went out with Annabel to eat.  As always there was much discussion on restaurant choices.  But that night we wanted guaranteed deliciousness, white tablecloths and sparkling wine glasses so the local, family run San Lorenzo restaurant met our needs.  It’s related to the Beauchamp Place San Lorenzo made famous by Diana.  Ghigo Berni, the Wimbledon boss recognised us as long lost neighbours and came and shared wine and talked about the years when Boris Becker stayed in our house and ate in his restaurant – and won the championships. Boris quotes on the restaurant website “No other restaurant has felt like this to me.”  And we feel the same.

We feasted on seared scallops, pasta with truffles and cream sauce, sea bream and a couple of bottles of white wine and Mark left promising Ghigo a signed copy of his book, Spirits Distilled.

Before dawn on February 6th, Mark took a hammer and axe and demolished the old shed in the Wimbledon garden, packed it in my car and drove it to the dump. It was a job I had planned for the morning but as usual, Mark beat me to it. By the time he returned I could tell he was unwell and for some reason, exhausted.

But at lunchtime he set off to Shoreditch to give his monthly talk to 35 bartenders from bars in trendy East London. He’s been doing this every month since 2002 with Matchbar, Rushmore and London Union.

He delivered his three hour talk and tasting to introduce the new teams to spirit production and told them of the year’s plan.

Kevin Armstrong who runs the business emailed Mark back when he received the news that Mark was unwell.

‘You have made an enormous contribution in terms of bartending standards, knowledge and training. Your programme and its reputation along with ours has been one of the key contributing factors to why we were able to attract London’s very best bartenders. I know many of our team will be extremely saddened.’

Simon, our son met Mark off the train at Lewes, and drove him to Seaford, staying with him overnight then onto the appointment where they learnt the news that all is changing.

Thankyou to everyone for their exceptional kind comments and thoughts and please be sure to ’Seize the day.’

I have just been made a life member of Southover Bonfire Society which is so much appreciated, as those of you that live in Lewes know.